"STEVE HART, the "Used Magician" is one of the better cheaper acts available today!"

Why YOU Want to Use Steve?


If you are going to hire a magician...make sure you hire a "Used Magician" Steve Hart. Why? Because he is experienced, dependable, flexible, affordable, FUNNY, entertaining, professional and he is a guaranteed crowd pleaser.

Steve has been working professionally as a comedy magician for over 25 years. He has been used successfully by countless talent agents, entertainment directors, event coordinators, production companies and corporations to provide entertainment filled with fun and laughter.

"My work as an entertainer...is to create magical moments that produce memories, smiles and wonder." Steve Hart

Steve has been used as a featured act for:

He has been featured several times at the Famous "Magic Castle" in Hollywood, California.

He hosted his own TV show the " Wacky Magic Cartoon Club" for WMCC TV -23 Indianapolis, Indiana.

He has performed all over the United States from all four corners ; Portland, Maine to San Diego, California from Seattle, Washington to Miami, Florida.

He is an magic author, lecturer, inventor and a performer for magic clubs and conventions across the United States.

To sum it all up....Steve Hart is a "Used Magician." You will want to use him too.

Read the reviews of Steve's performances on Thumbtack: 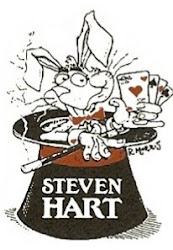